After skiing Le Massif’s steep scenic ski slopes, with the most vertical, 2,526-feet, East of the Canadian Rockies, you want luxury lodging, a beautiful modern hotel on the river at Baie St Paul,  just 15 minutes from the ski slopes. Even better if there is a train from the ski mountain to your swank après ski hotel in this beautiful artsy village of Eastern Quebec.

Thanks to Daniel Gauthier – the entrepreneur behind Cirque du Soleil and Le Massif ski success, you can stay at Hotel Germaine Charelvoix, which opened in 2012 as Hotel La Ferme.

This cool hotel is a most unique design offering a spa, centerpiece ice rink, and 145 rooms (from luxury to dorm style) in five campus style buildings. It’s brilliant, and its in the heart of Baie St Paul where the largest farm in Canada once stood (hence the original La Ferme name).

l’Hôtel & Spa Le Germain Charlevoix is ultra modern, while still being energy and environmentally friendly. Local products, timbers and designers were used in the four lodging buildings that comprise the pod style hotel and the common area.  The Main Building is home to a hip lobby and bar, the Spa, restaurants, the train station to the ski slopes, ski lockers and an amazing conference and ballroom.

Our luxury room in La Basse-Cour offered floor to ceiling windows, a grand bed in the center of the room, charming hand crafted cast iron pig and bunny furnishings, a sitting area and spa-style bath, plus iPod docking stereo, flat screen tv and espresso maker. What more could you want? A view of the outdoor spa and a circular ice rink? Done.

The Spa at Le Germain offers every treatment, but the ultimate is the outdoor hot tubs surrounded by snow fields enhance by soft subtle colored lighting. Perfect for an après ski soak.

Dining at Le Germain Charlevoix can only be described as hatue homegrown cuisine, served at breakfast and dinner in the open concept kitchen – Les Labours. The setting is very chic, at breakfast you have sunrise over the bay and in the evening the lofty dining room twinkles with white lights against native birch wood. The chef’s love of local product is evident and everything we sampled was delicious.

Walk to charming downtown Baie St Paul, where there are extraordinary local art galleries and great restaurants like La Muse, or you can just relax in the bar with a cocktail and cool music.

Take the ski train in the morning, to  Le Massif. The Train station is inside the Hotel, next to the ski lockers and ski boot dryers – genius design. Grab your ski gear, get on the train for the half hour scenic journey along the river to the ski slopes of Le Massif and back.

If you haven’t skied Quebec, you owe yourself a trip to Le Massif to see the ingenious modern ski resort, the Hotel and Train, and just enjoy some of the best Eastern Canada skiing and scenery of the St Lawrence. Le Massif ski resort offers the highest vertical east of the Canadian Rockies, 2,625′, 52 trails and 99 acres of backcountry glades, plus a 7.5 kilometer sledding run. Le Massif is just 40 minutes from Quebec City and half hour from Mont Sainte Anne Ski Resort so you can make it part of your Eastern Canada ski holiday. See more Top Ski Hotels in Canada. 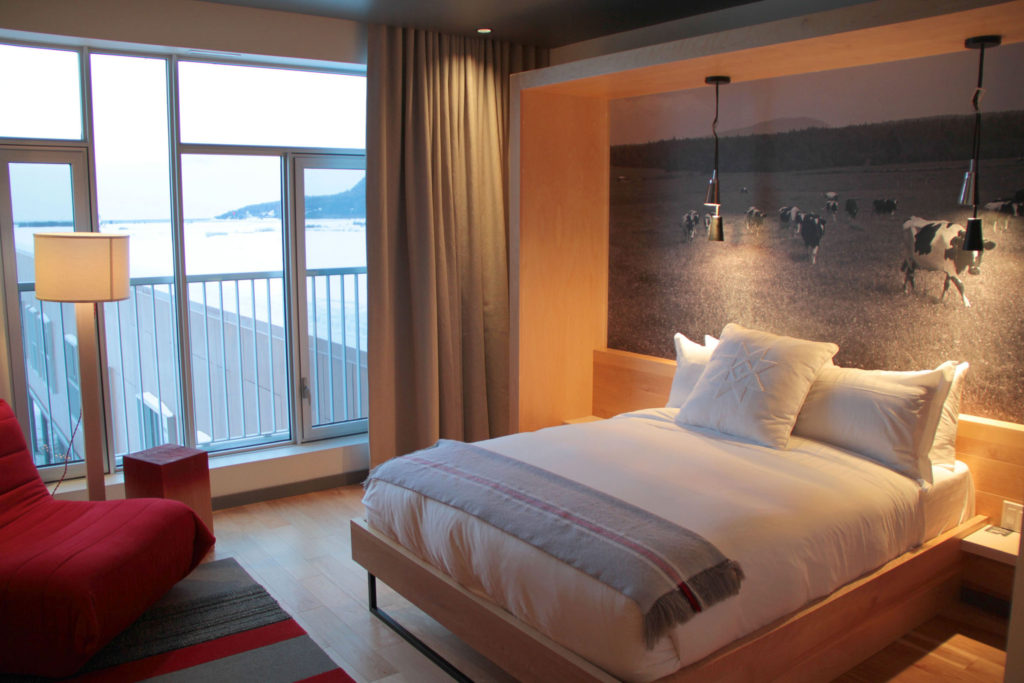 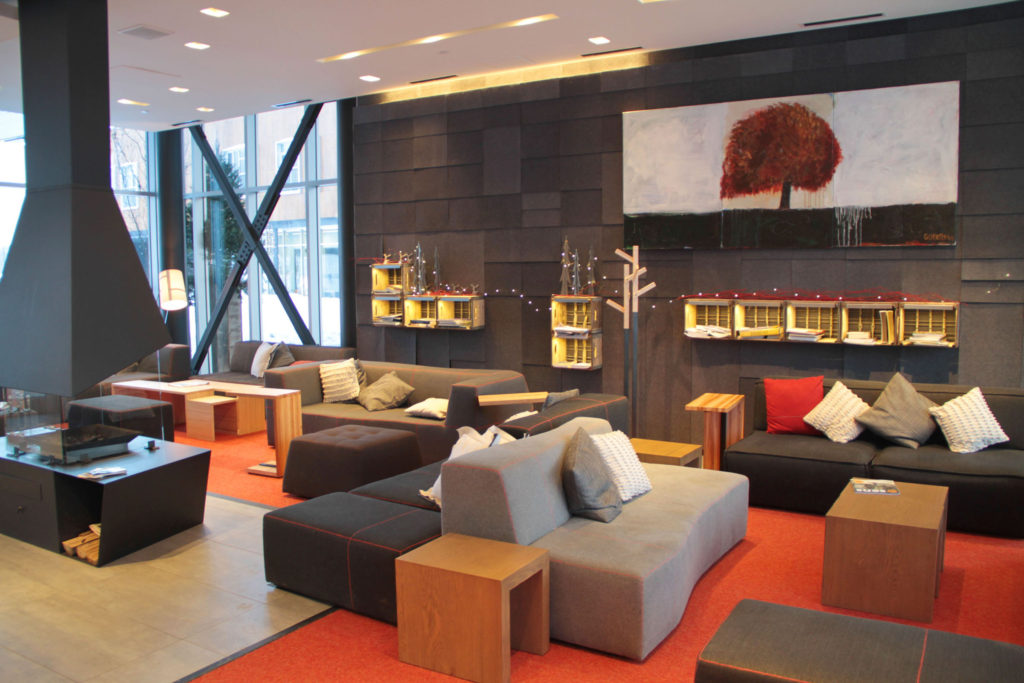 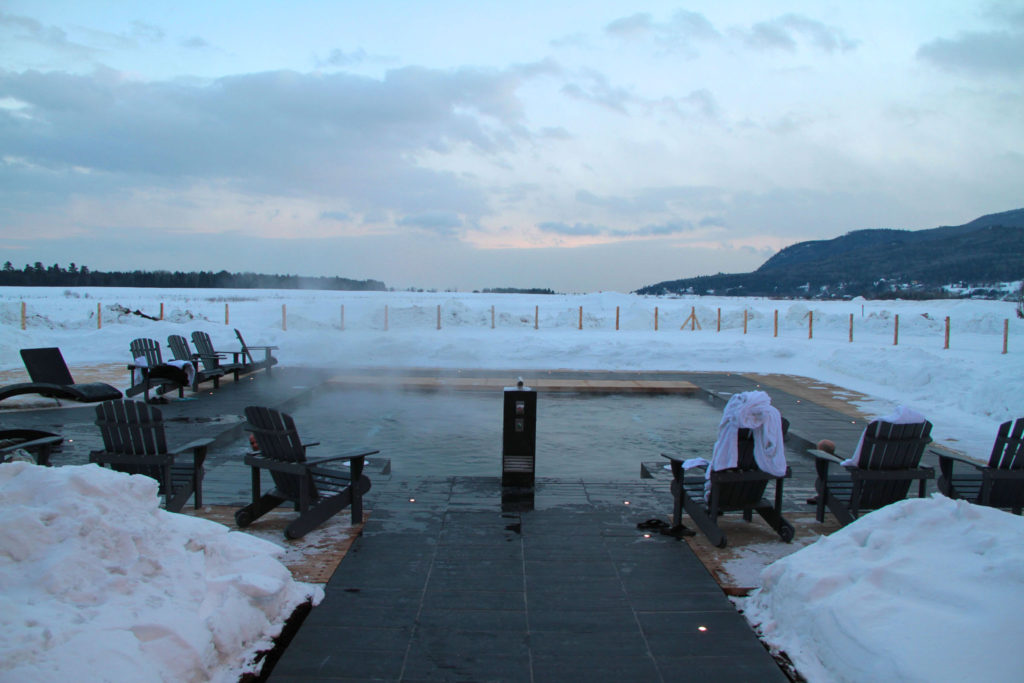 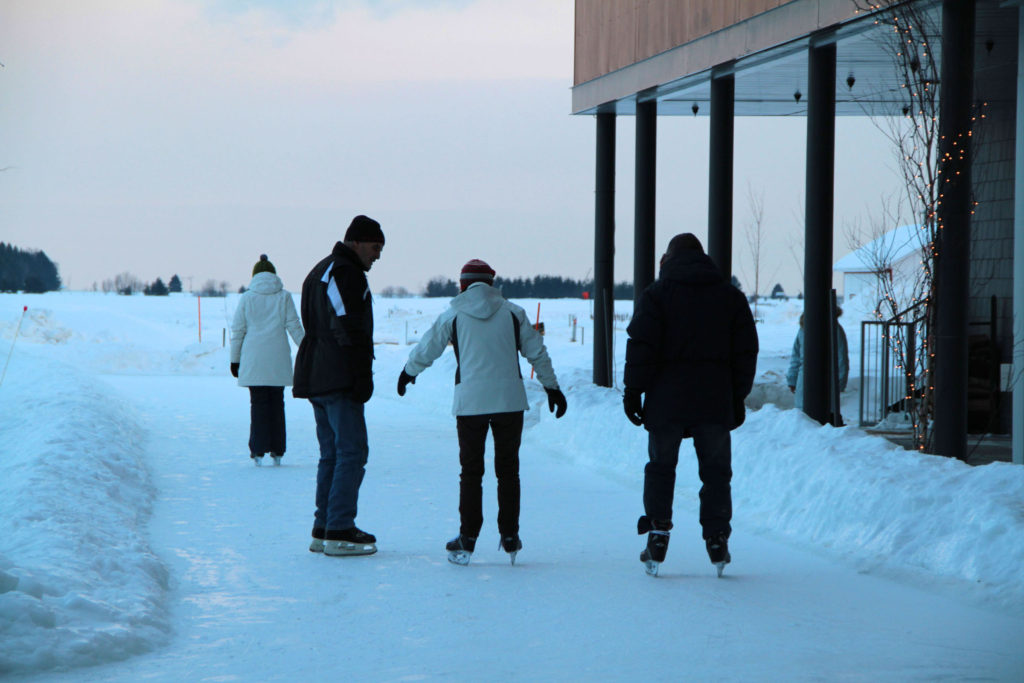 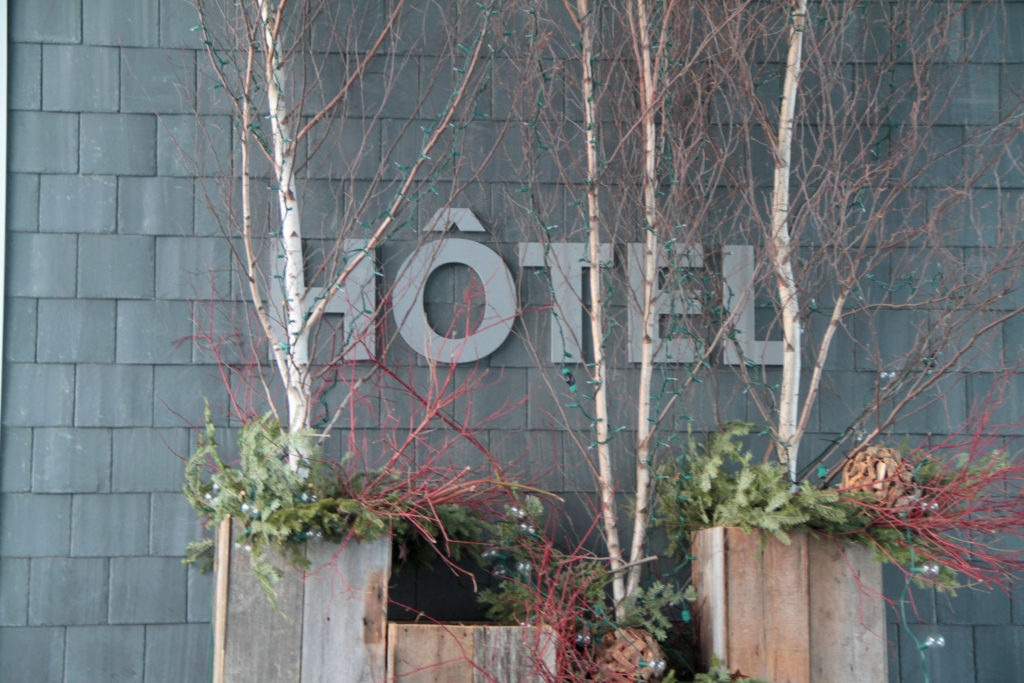 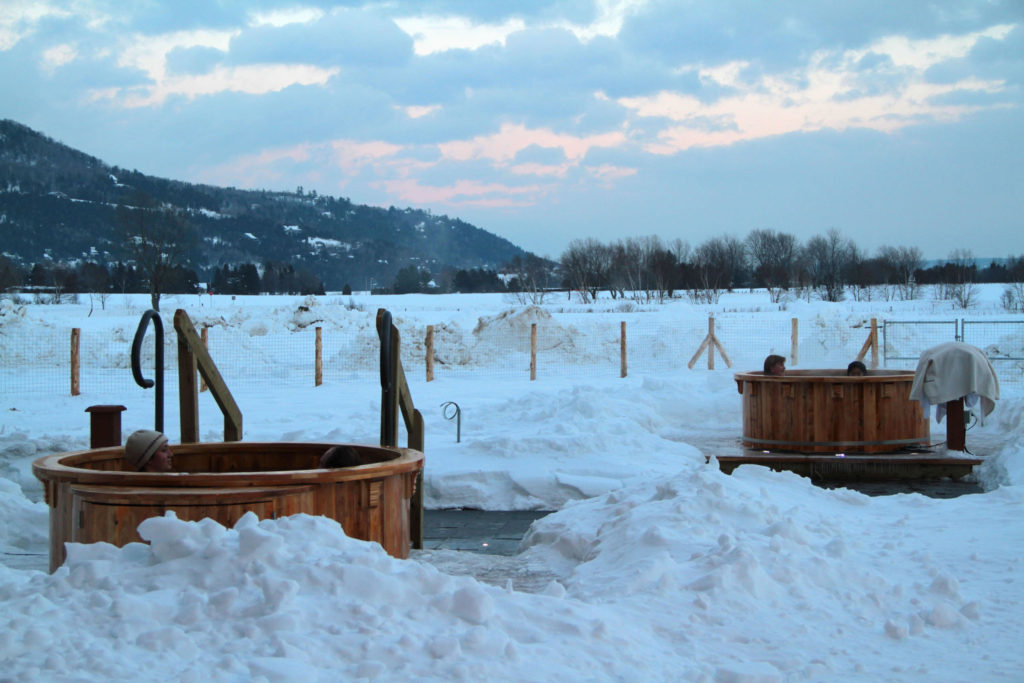 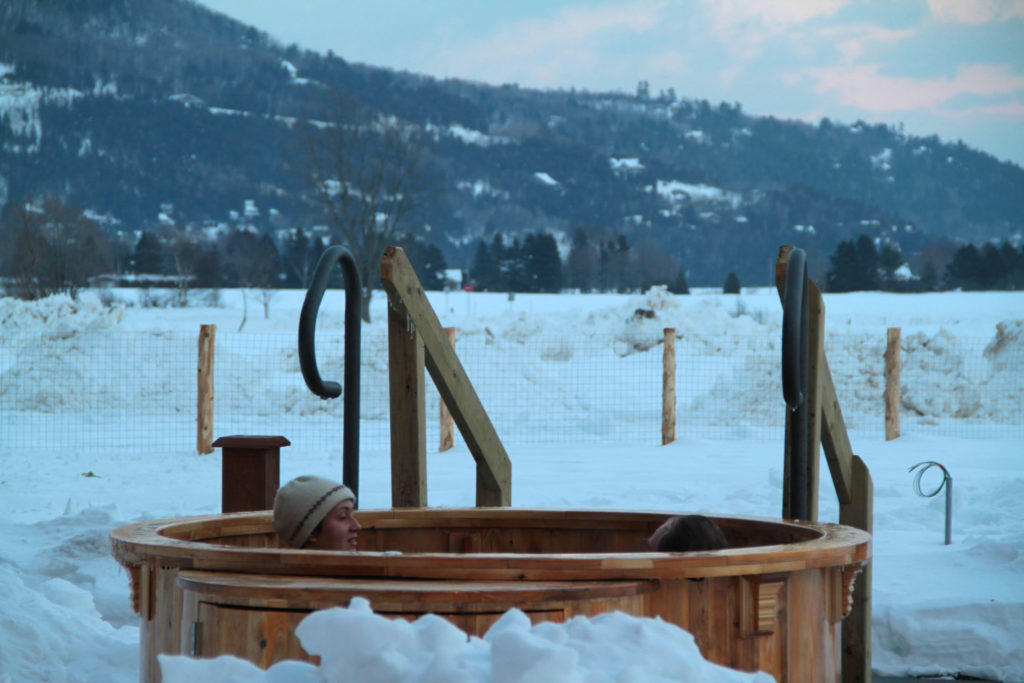 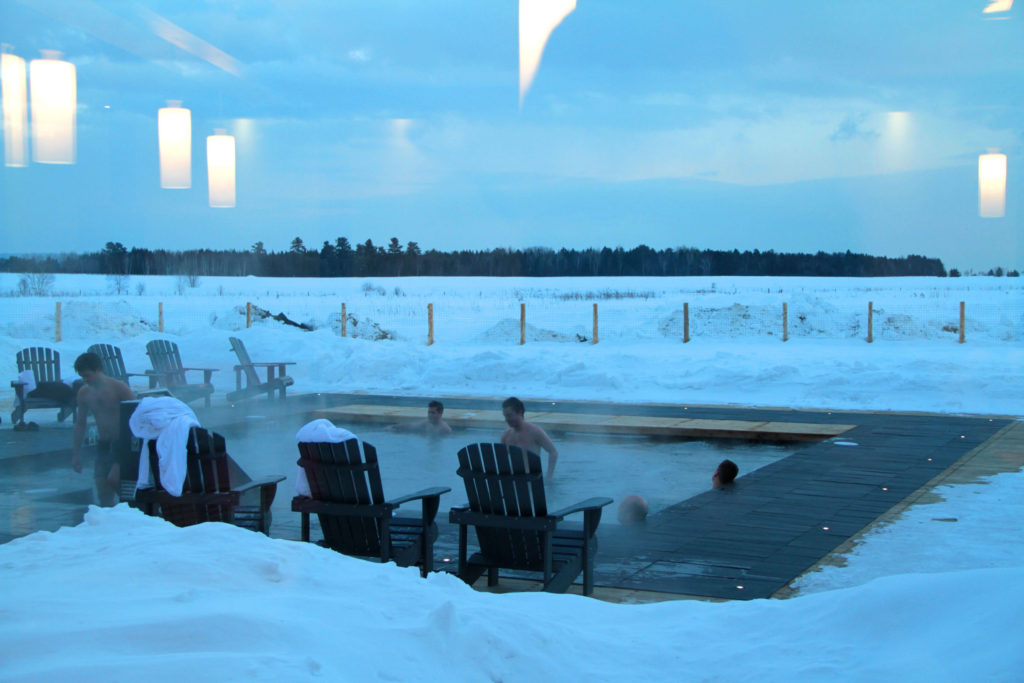 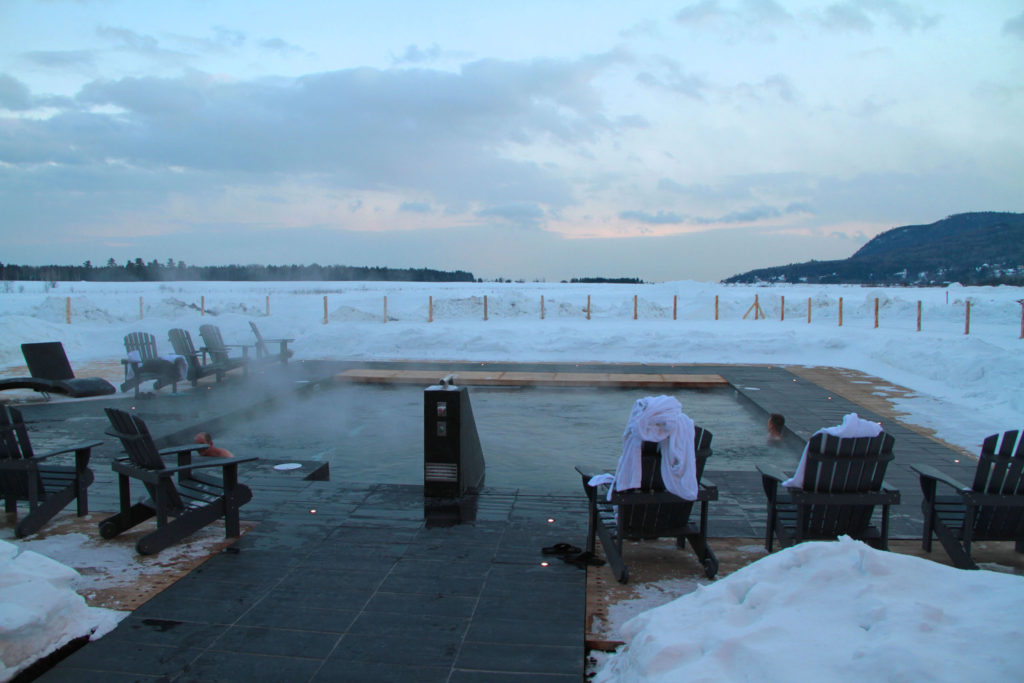 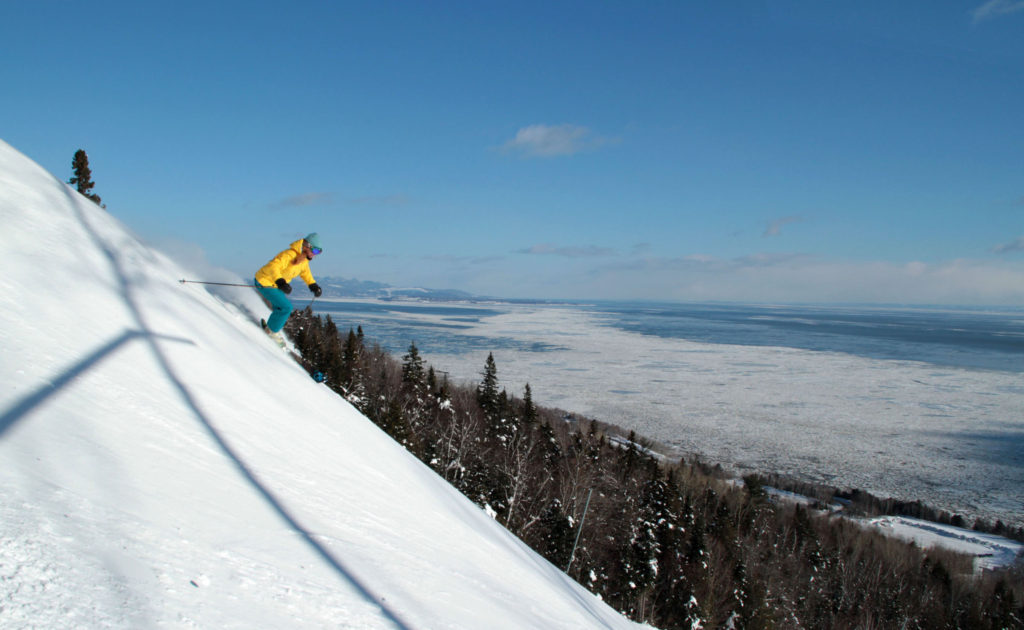 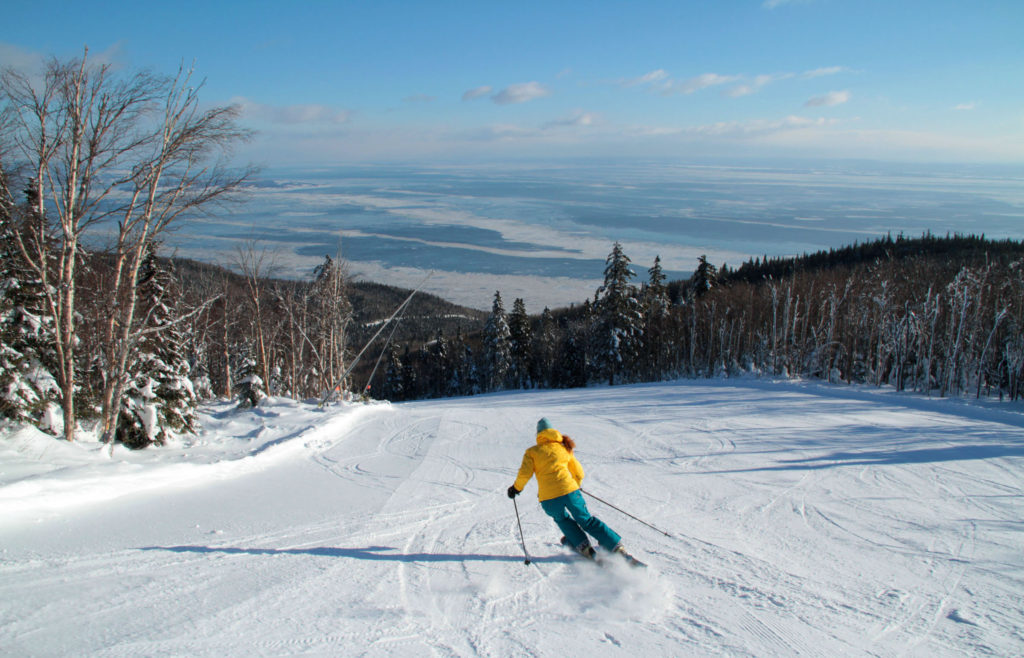