Charleston South Carolina doesn’t typically come to mind for a luxury vacation. Florida usually wins for warm weather and waterfront hotels in abundance. We took a chance on a Charleston vacation, and we were absolutely charmed …

Charleston claims many historical “firsts,” founded in 1670, “first” in key battles of the Revolutionary and Civil wars, inventions like the cotton gin, even exports of peanuts to pecans and tea originated here. Whether you are captivated by pirate antics and haunted houses, fascinated armed forts and aircraft carriers, awed by antebellum mansions or just lured by local seafood – Charleston plays to all times and tastes. Plus you can hit the sandy beach or go boating along the southern coast.

Top 10 Things to Do In Charleston:

Stroll the Streets of Charleston
With sneakers and a smile, Charleston is a fantastic walking city. Cobblestone streets are lined with gracious antebellum homes and shady trees draped with moss. Step back in time with a horse drawn carriage ride along the picturesque painted homes of Rainbow Row and Charleston’s 400 historic churches. Besides the scenery, the folks here ooze hospitality with their “sweet as pecan pie” southern accents.

In Town Plantation Sophistication
For authentic urban plantations in town Charleston, the Aiken Rhett House and Nathaniel Russell Mansion glean what city life was like for the wealthy in the 18th century, and conversely – what child slaves endured. Charleston’s past is one of pride and prosperity, while in the shadows are the roots of human bondage. Charleston was nicknamed “Ellis Island of Africans” as the port of entry of almost four million African slaves.

Go To Jail
Charleston’s Old Exchange Building and the Provost Dungeon were built by the British in1768 to collect the King’s taxes. The grand Georgian Palladian building near Battery Park later became the social center and meeting place of the Continental Congress. Below is the eerie Dungeon where pirates and patriots were imprisoned.

The Notebook
Visit “the most photographed” Boone Hall Plantation. The grand half-mile entry is a splendid canopy of live oaks draped with Spanish moss transporting you back to a bygone era. Boone Hall is famed for movies like “The Notebook”, “North and South” and Alex Haley’s “Queen” with Halley Berry. But the true story of this elegant estate house, the crowded slave houses, is the work conditions at a 17th century plantation, which exported everything from indigo, rice and cotton, brick and tile from the clay river beds, to pecans, grapes, berries and peaches. 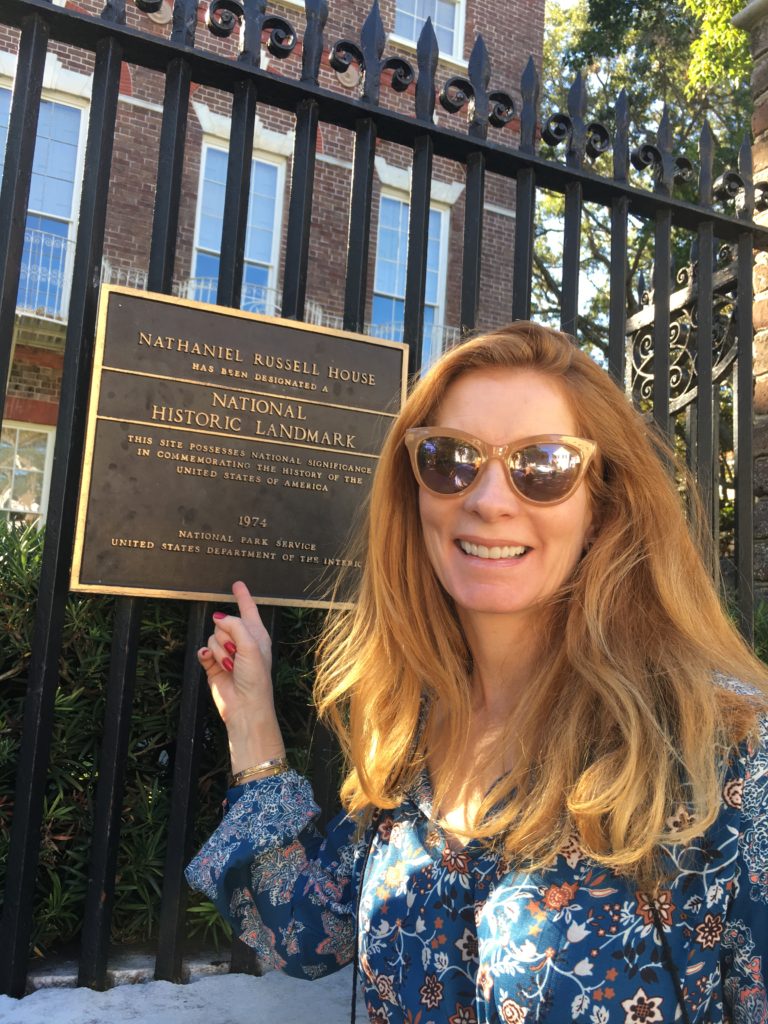 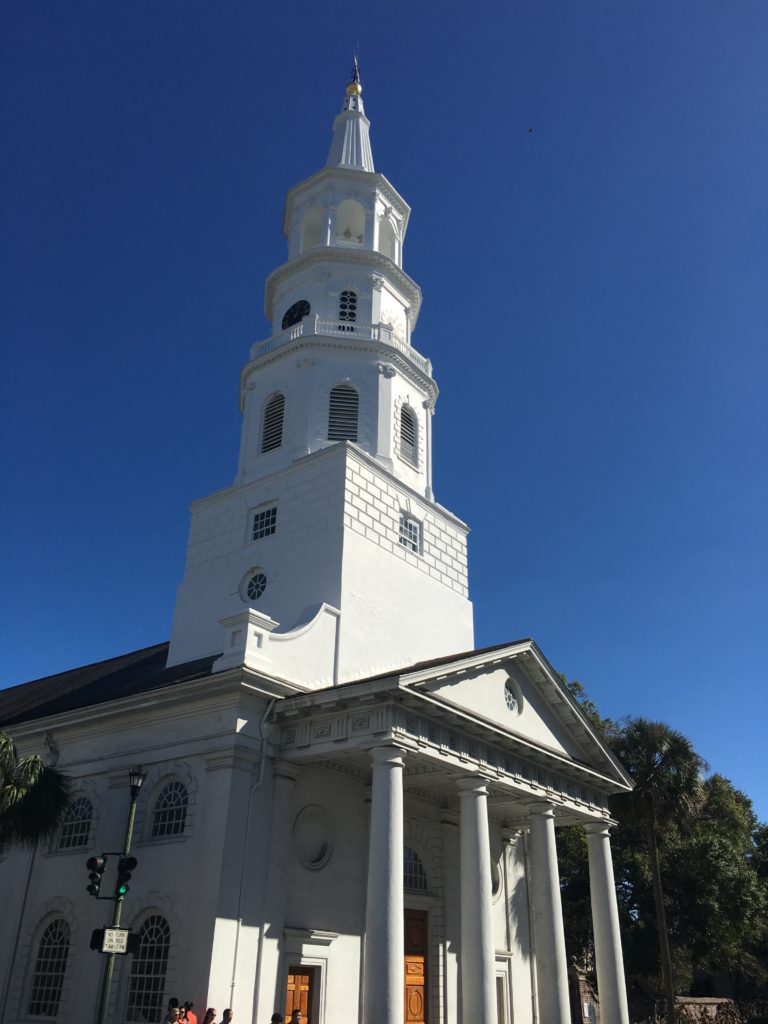 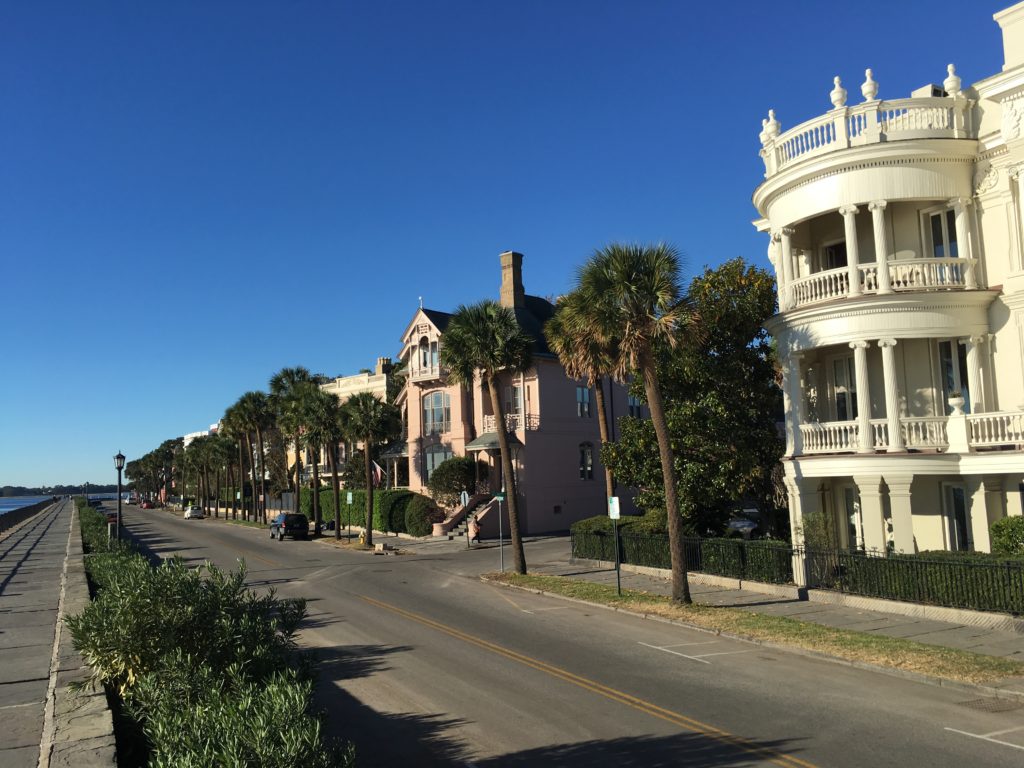 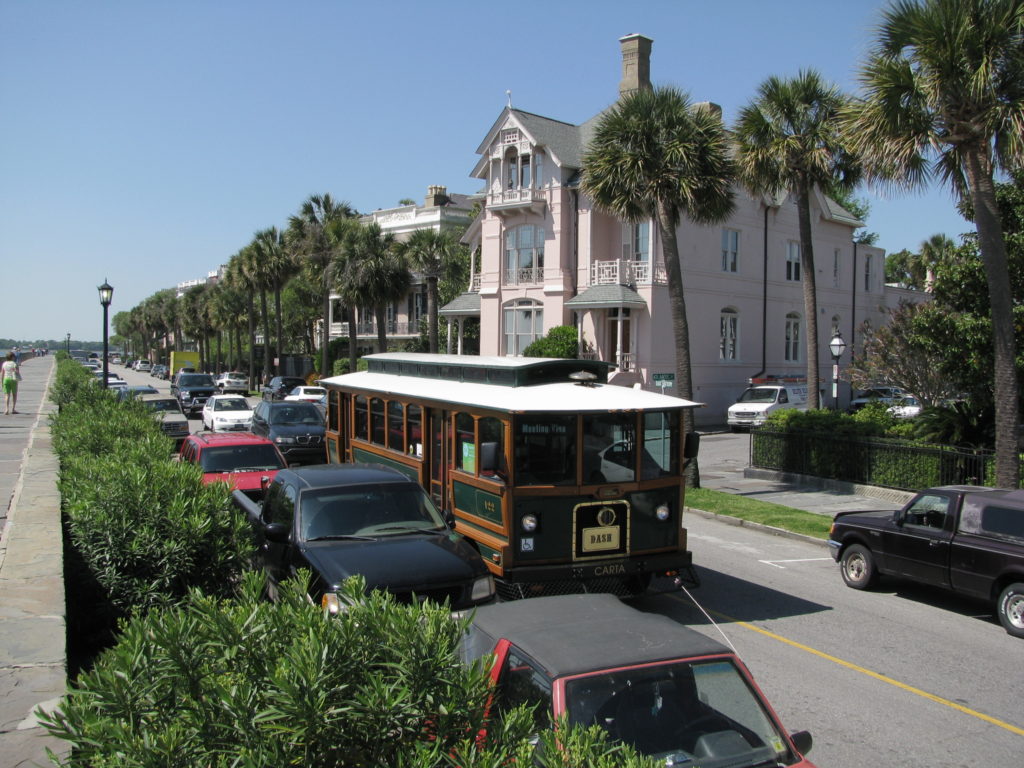 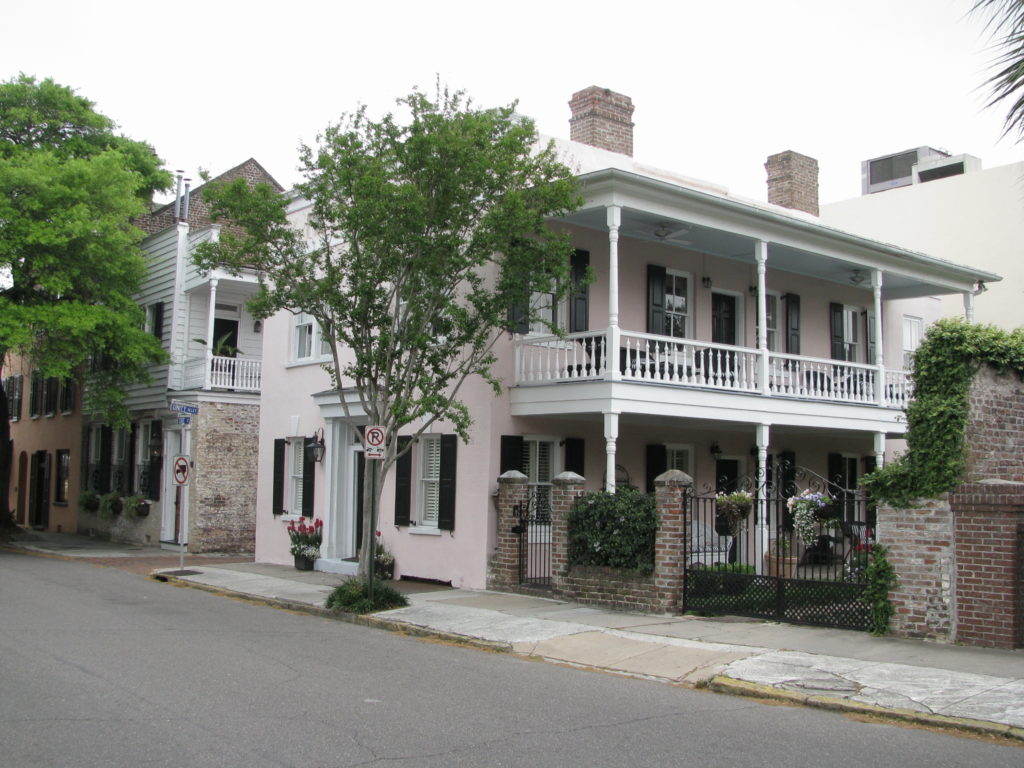 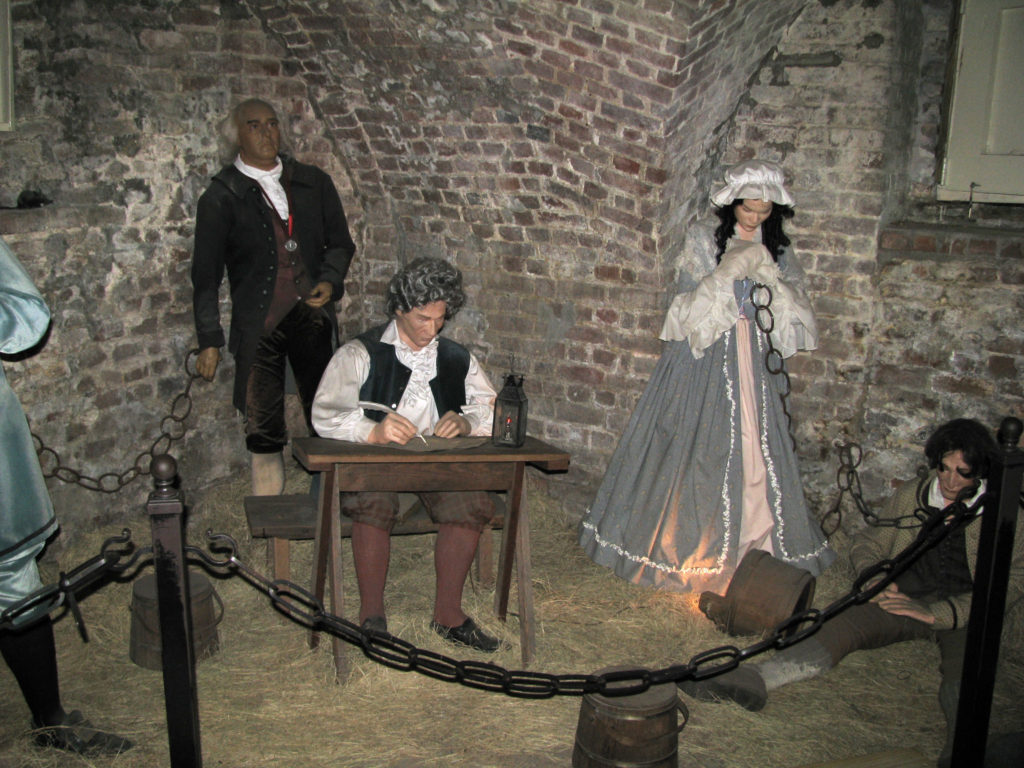 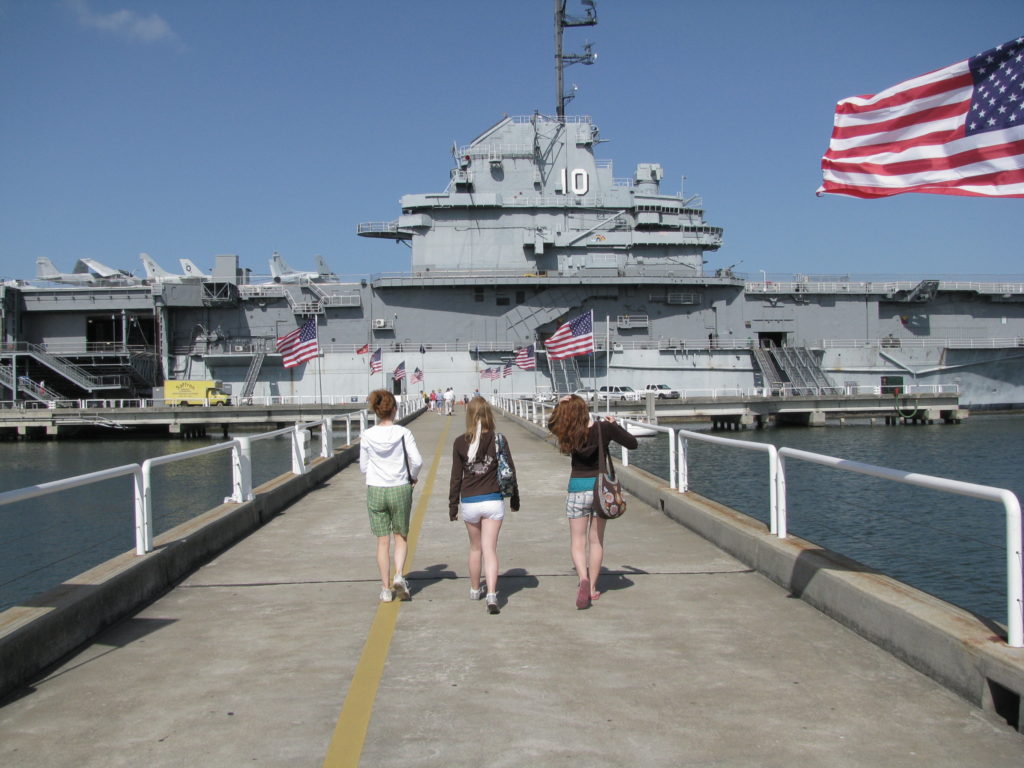 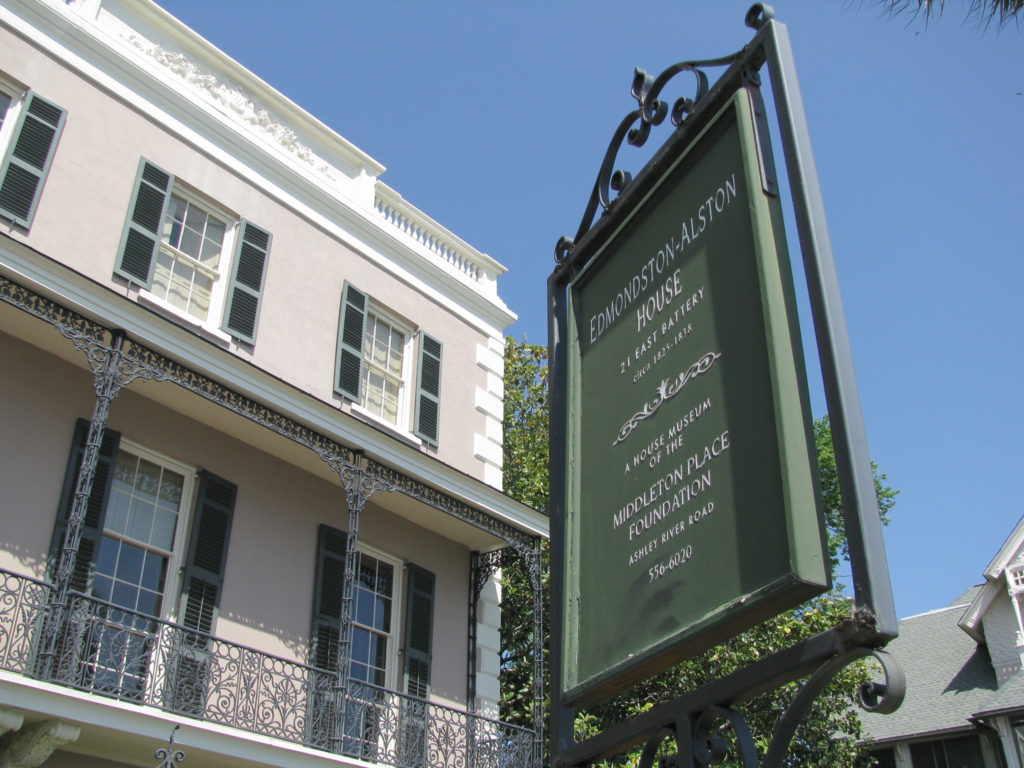 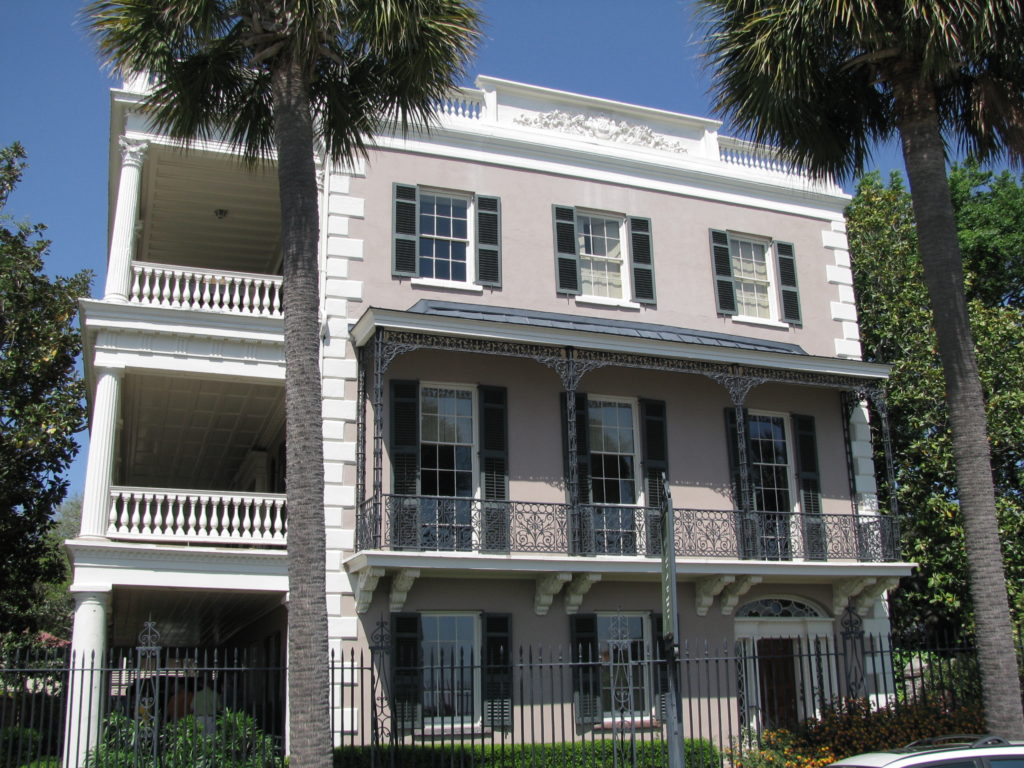 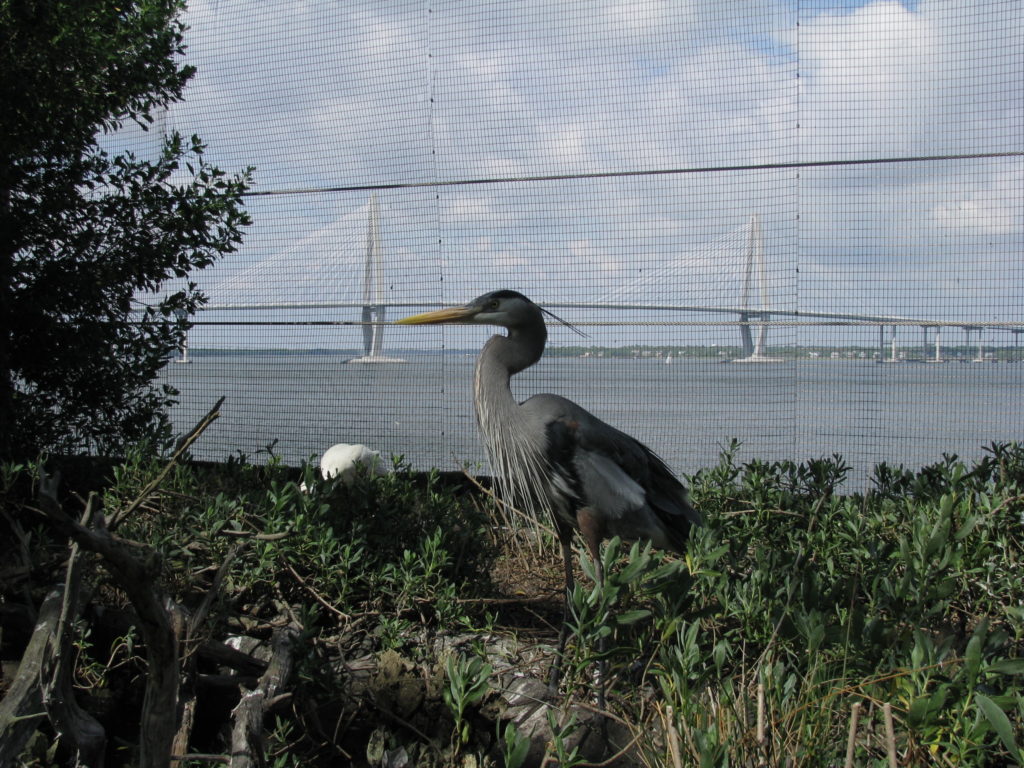 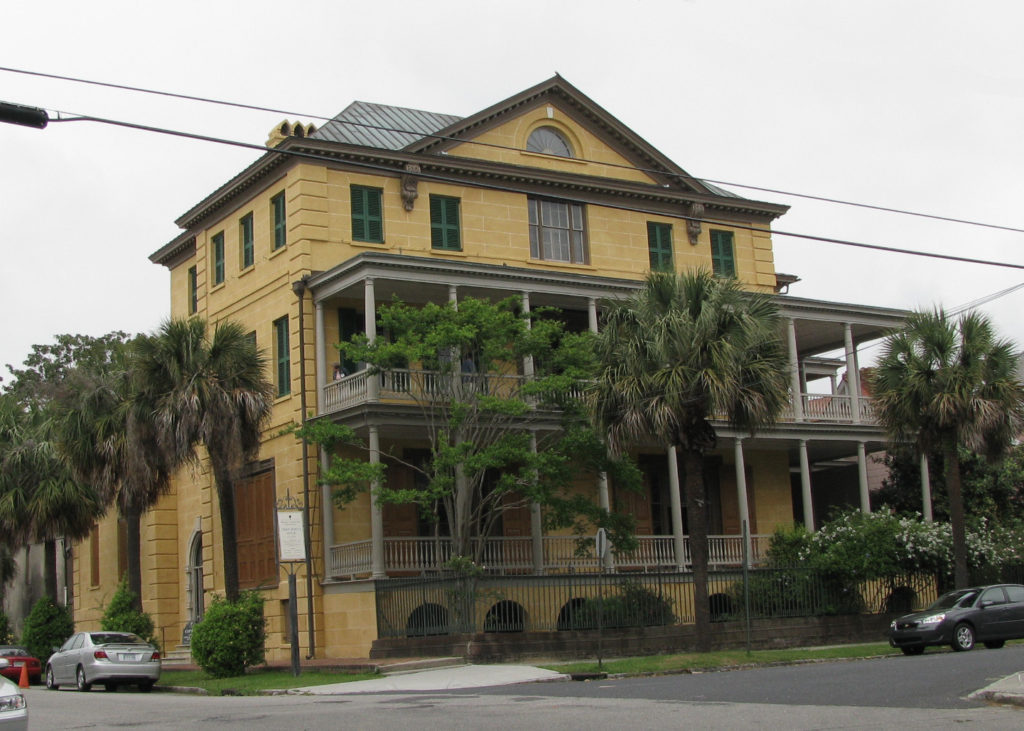 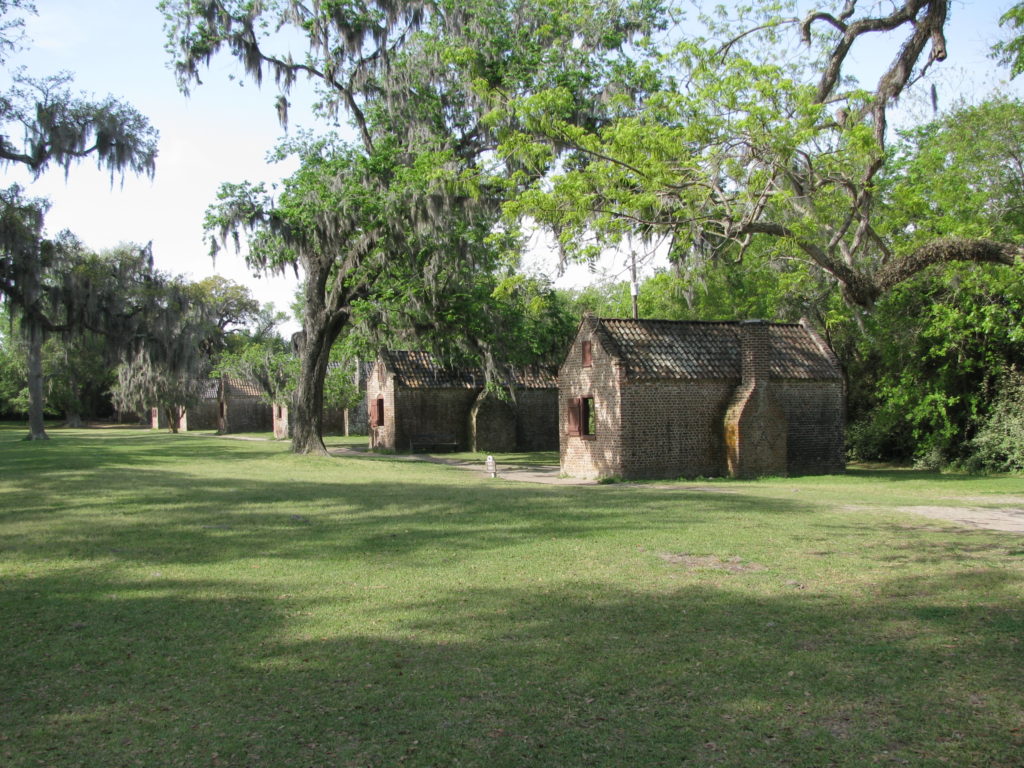 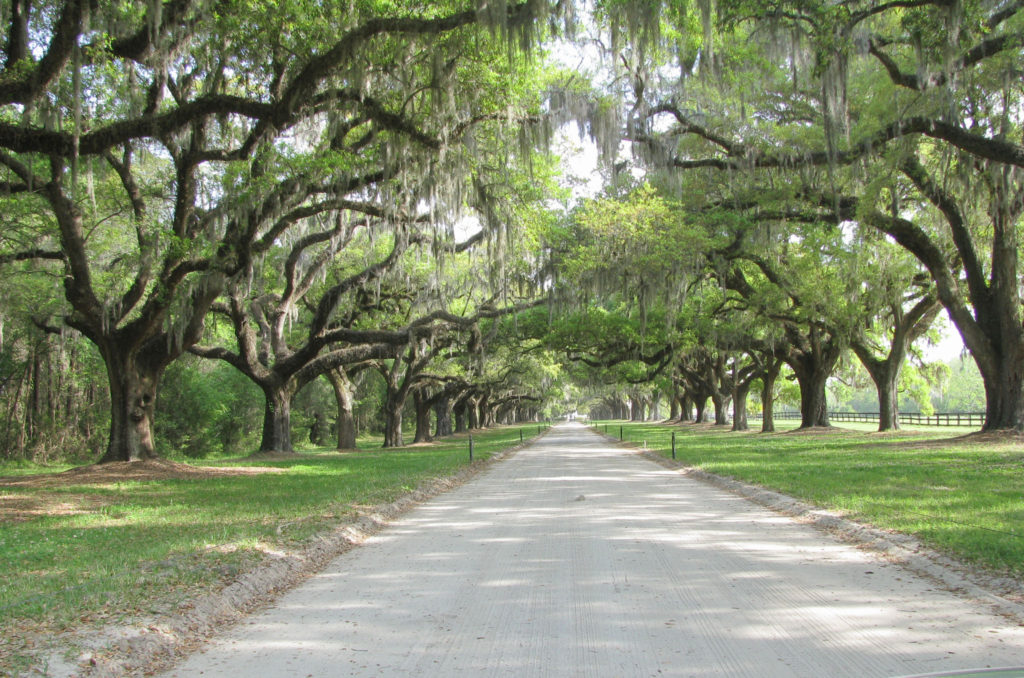 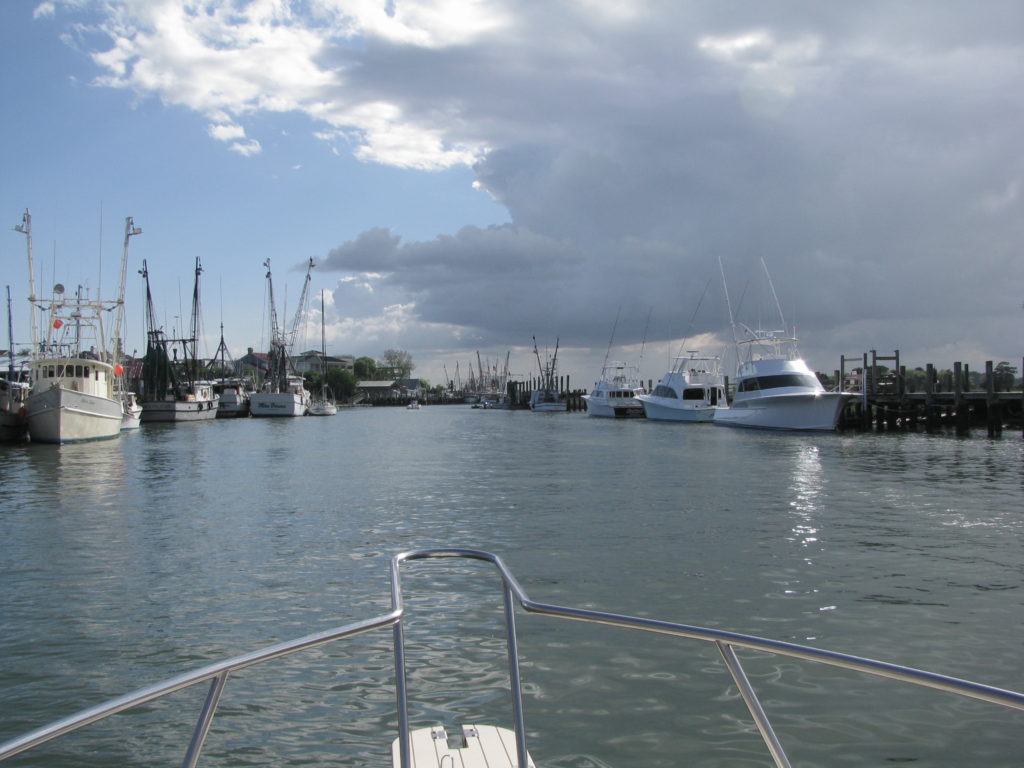 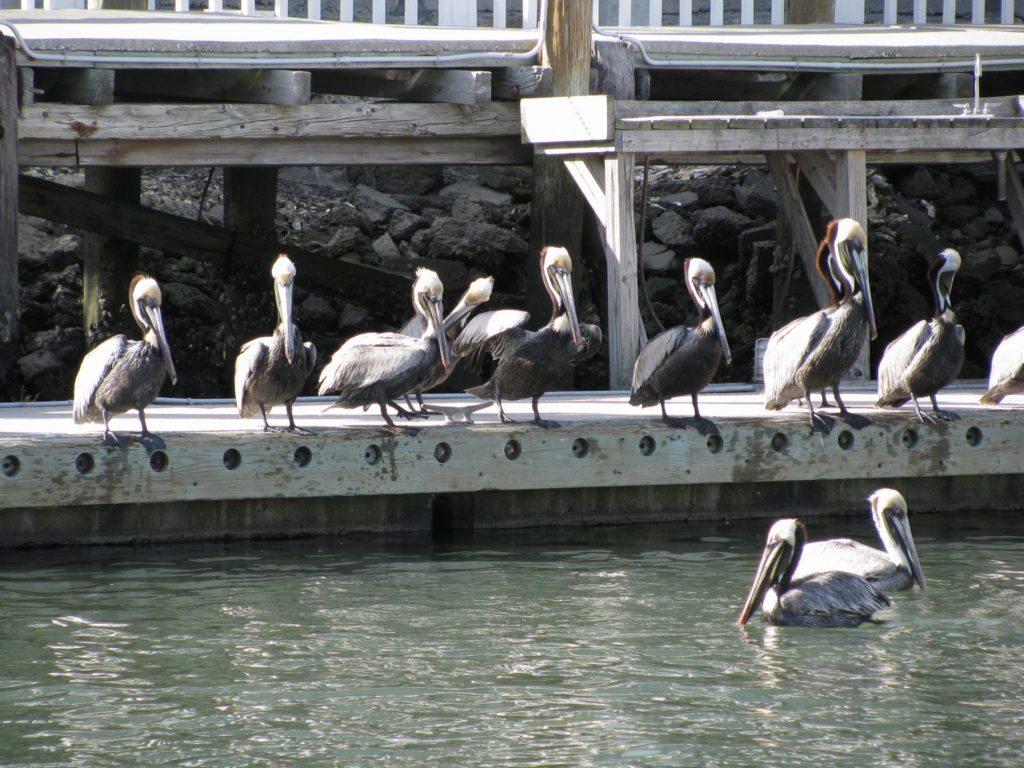 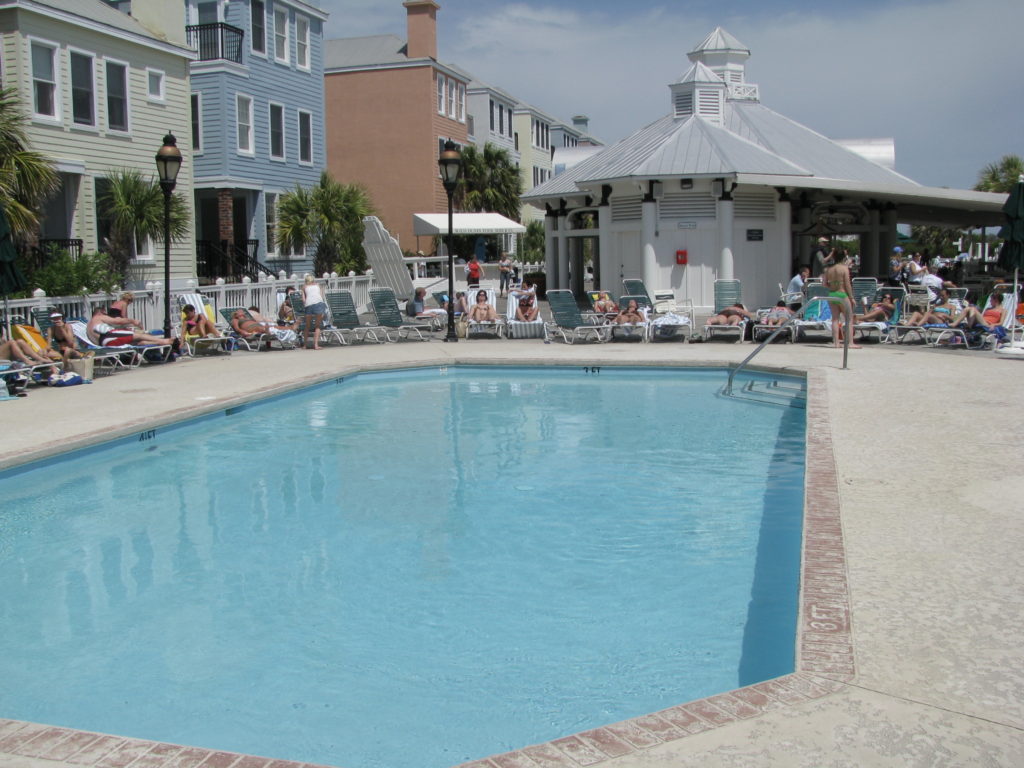 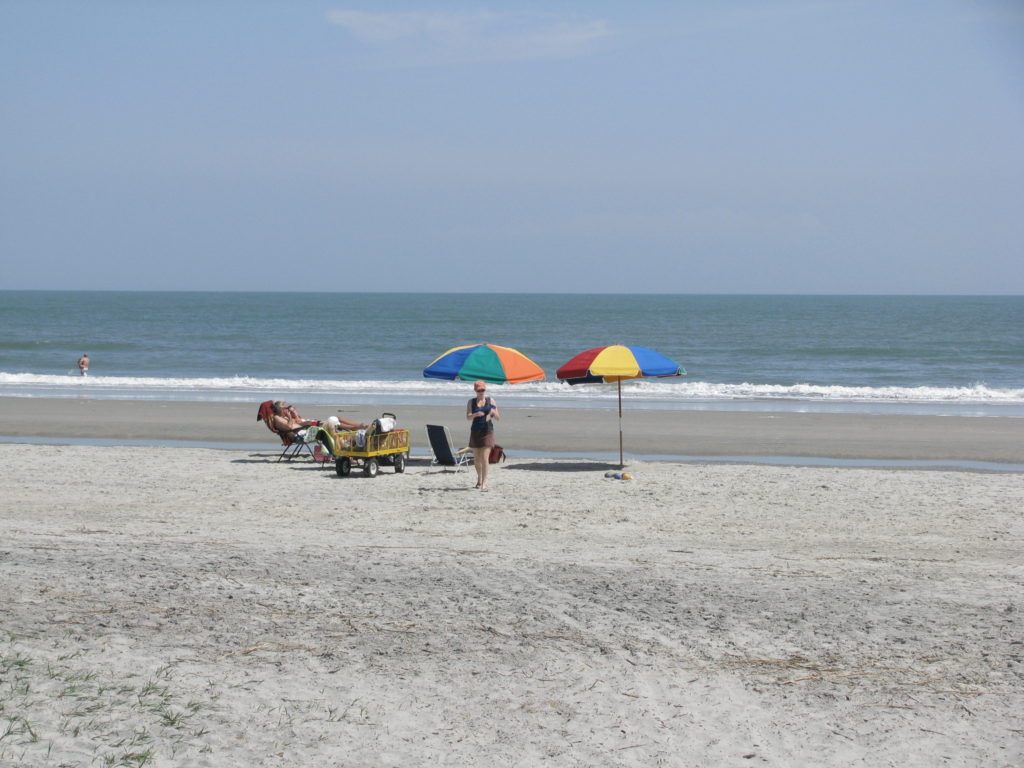 Hospitality or Humanity
Middleton Place, along the famed Ashley River, offers more insight to life on a 1741 plantation of the wealthiest family who owned over 800 slaves. The beautiful grounds and reflecting pools (which hosts a family of alligators) speak to the incongruities of our American history. Middleton endured the Revolutionary War, the Civil War and the earthquake of 1886, and hosts America’s oldest landscaped gardens.

Forrest Gump – Bubba Gump
Stories of starving slaves builds an appetite for Bubba Gump Shrimp Co, Charleston’s memorabilia-filled eatery based on the 1994 movie “Forrest Gump”. Enjoy “low country” southern style fixins of crab, oysters and shrimp. Y’all just have to try gravy-laden shrimp and grits – which Washington devoured on his 1791 southern Victory tour. For more sophisticated dining, Poogan’s Porch on Queen Street is a typical southern style restaurant in the heart of Charleston. Try the She Crab Soup with delicious homemade biscuits, or alligator, or a bacon burger at neighbor Husk of Poogan’s is packed. Don’t miss the dog’s tombstone in the front yard.

Gospel Brunch
Sunday Brunch is even better with a gospel choir singing over Bacon Bloody Mary’s or Bellini’s and Crab Benedict at Hall’s Chophouse on the shoppers’ favorite King Street. Host Billy Hall will greet you with genuine warmth, and local Gullah women will sing the most beautiful gospel during your Sunday repast. Perfection.

Haunted Charleston
Charleston is a most haunted city – eclipsed only by nearby Savannah, an evening ghost and graveyard tour dishes more chills and shrills than any scary amusement park ride.

Drinks and a Room with a View
After exploring Charleston’s City Market shops and crafts, head to the rooftop bar at the luxury Market Pavilion Hotel. Its scenic, and the place to be seen on a sultry evening at sunset.

Patriots Point
Battle buffs can tour the Yorktown aircraft carrier, battleships and a Clamagore submarine. Then board the harbor tour to 1861 Civil War Fort Sumter– its a “muster.”

Head to the Islands
A 15-minute ride from Charleston, over the Ravenel – the longest cable stay bridge in the U.S. ($700-million in 2002), brings you to the barrier Isle of Palm and sandy beaches and palm trees. Stroll the long and wide beach on the sea side, savor sunset over the inter-coastal shore at Morgan Creek’s rooftop bar, or rent a boat from a local marina.

When to go? Friendly South Carolinians say April and May, along with October and November are the best times to “beat it down” to Charleston, while summer can be peak heat and humidity.

Charleston is charming if you crave substance in your sojourn . It’s an education vacation, the history is rich and deep – like the southern drawl. You can have your beach-time too. Did I mention the friendliest people on the planet? Also visit sister city Savannah Georgia and Hilton Head Island during your trip South.